From Greek history and mythology to the myth of Genesis we explore the ripples of losing the connection of co-creating life, of losing our paradisial innocence. We heal by enhancing our Inner, outer and greater body acceptance through stripping layers of conditioning.

Let’s explore the myth of the original sin and our expulsion from Paradise, in relation with Greek mythology and the correspondence of the myths to anthropological and historical narratives. Let’s explore the ripples of losing the connection of co-creation between men and women, when women claimed the power and blessings of child bearing (as Eva eats the apple of knowledge first), and our expulsion from Paradise (as Adam receives the knowledge, blames Eva and makes an ethical shift, enslaving women and attacking their sexuality as a sin). At this moment of ethical shift, we were expelled from Paradise. In order to restore meaningful community it is necessary to restore the first concealment of truth, that created devastating results for women and men, so we begin to heal primal traumas. Paradisial nudity is essential in order to accept our wholeness and reveal the clothed truth, from the depths of our souls. The presentation will come in the form of storytelling followed by a brief discussion with an anthropologist and a psychologist.
Nudity during the online workshop is optional. 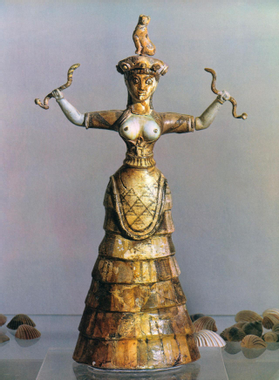 Through the depths of time a baby’s cry echoes on the mountains.

Hestia sends flickering flames creating a dance of light and shadow on the walls of the circular sacred space. The steam from the boiling water adds to the eerie atmosphere. The greatest transformation, a great mystery is in process.

A young girl became a cocoon woman and has just shredded her cocoon open. A baby boy is born. The drums begin to beat as the young mother is aided from her kneeling position to the soft warmth of the animal skins covering the earthen floor. She has just received the ultimate honor of transforming from a simple human, to a sanctified representative of the Great Mother Gaia.

Midwives run around with clay bowls of warm water and soft cloths, cleaning blood from both mother and child and undulating the mother’s belly, until the placenta and blood are completely expelled.

The baby is placed on the mother’s nipple. A new transformation begins, as for the first time her body provides nourishment, just like the Great Mother has been providing for all creatures from the beginning of time.

The baby and boys up to twelve years of age are the only males in the radius around the village shrine. The men are intentionally kept unaware of their natural place as co-creators, unaware of the transformation, of the miracle, of the responsibility of humanity’s continuation. They are handled, through taboos, bestowed by the Great Mother’s priestesses.

The Sacred Wedding gives women the opportunity to choose their mate. A taboo is created around the magical powers of women’s blood, which flows from their bodies mysteriously every month, no wound visible, to feed the Earth, who in return gives them her power to create life and nourishment. This allows women to control fertility.

Ever since women shared the fruit of knowledge, they figured out a way of controlling when to be impregnated and give birth. The great secret kept men in ignorance, at the outskirts of the village in awe and fear of these magical powers.

As women drum, sing and dance, swirling their long black or gray hair to drive evil spirits away, the younger ones are feeding the large Hestia with wood, until the huge clay cauldron is warm enough. The young mother will be placed in it to help the womb go back to its original state.

In the following days the mother will perform the undulating, contracting and circular movement dance with the holy snakes, the brothers and sisters of the great Python, protector of Gaia. She has already been given a warm water potion of flower essences and a teeny tiny drop of the house snake’s venom to regain her power and be shielded against infection.
What a wonder for the men, how women healed and predicted environmental changes, using venom and multiple herbs and watching the snakes’ movements and behavior!

The first waves of imbalance of not sharing the truth rippled to the devastating moment when man, after partaking in the knowledge, creates shame and sin around female sexuality, enslaves women to produce heirs, and other humans to produce property.

This devastating moment comes when Adam first speaks of shame, awareness of nudity and blames his mate for what happened. At this moment we are thrown out of heaven. It is also the moment he names his mate Eva, which means life. The cycle of life and death breaks and the two poles are no longer complementary and creative, but opposing and destructive. Death is coupled with fear, and fear is used to develop brutal systems of control and power, to today’s global mass hysteria of the pandemic.

And thus the Battle begins. Gaia, stripped of her honor and power from her husband Uranos, whom she gave birth to and married, uses her son to castrate and kill her husband.

The nomadic tribe of Pelasgi, the first indigenous tribe that inhabited the Thessaliko campo before the descent of the Greeks, had no walled cities. They moved to mountain Pelion, the house of the wise Centaurus Hiron, every summer to gather chestnuts, walnuts, apples, cherries and all the other goods the blessed mountain offered.

In the winter they stayed at their villages, down at the campos next to the river. They fished both in the river and at the sea close by, tending to their animals, collecting wild greens, and feeding off their summer provisions.

Until… until Jason with his hordes of savage centaurus, killed, rape
d, burned and enslaved the peaceful Pelasgus. Jason’s city was walled. His army of horse-riding men looked like they were half-human half-horse, as they were capable of using their weapons and snatching women without dismounting. Thus the savage centaurs appeared in mythology.

Men cut off from the consciousness of their involvement in creating life, honored and developed other survival skills than women. The Yin and Yang of humanity, instead of flowing from an unconscious to a conscious paradisial state, came to war. In a world, where technological progress solved all the basic survival problems, it is time for healing and a shift of consciousness towards love.

If we cannot accept our own body and bodily functions, how are we going to accept others? If women do not share their power of creating life with men, how do we expect the war to cease and nurturing life to become the core of our existence? It is time to restore and further develop the vital importance of Eros, through an all loving, respectful, honoring way of treating this great gift through freedom. Labels no longer serve the value, equality and freedom all creations naturally enjoy.

Eleftheria,  the Greek word for freedom, comes from two words, eleftho eros, which mean I go towards love, to where my heart desires.

It is time to heal the initial mistreatment of truth, and Truth is the only power that can ensure freedom, love and a better world for us all.